This Agreement version has been prepared on the basis of amendments applicable as from January 1st, 2015.

In English or Italian, Safety ADR© is an app that allows you to:
– Search the full table A cap. 3.2 ADR for UN / name / class / other;
– New search by orange panel;
– Fill in the ADR for each subject “Report the substance” with the “Safety” parameter ;
– Fill in the ADR for each subject “Tremcards P.0”;
– Get real time news on the home screen;
– See ADR labels, classes, Kemler.

The completed documents, “Substance Report” and “Tremcards P.0” are automatically stored and can be printed with Air Print or sent via e-mail in pdf format. 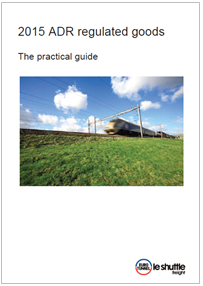 The Channel Tunnel has been designed to be one of the safest transport systems known to date.

Eurotunnel’s policy on the carriage of ADR regulated goods is therefore designed to ensure the safety of its customers and staff, and the integrity of the Tunnel.

This policy has been produced in close collaboration with industry and with relevant trade and professional bodies.

The carriage of goods classified as hazardous through the Channel Tunnel must comply with ADR (European Agreement concerning the International Carriage of Dangerous Goods by Road).

ADR regulated goods definitions are subject to the 2015 revision of the ADR regulations.

Declarations have to be made using the 2015 ADR revisions from 1st July 2015.

Eurotunnel Freight will accept, restrict or refuse goods on the basis of ADR definitions.

This ADR regulated goods policy has been decreed by a By-Law in the UK and an Arrêté Ministériel in France and forms an integral part of Eurotunnel.s Conditions of Carriage.

The carriage of Dangerous Goods must also comply with Eurotunnel.s own regulations as described in this document, which are more stringent than those in ADR, to reflect the specific safety characteristics of the Channel Tunnel infrastructure.

The carrier is responsible for ensuring that the goods he is carrying comply with these regulations. Furthermore it is also the carrier.s responsibility to provide the compulsory documentation, including for vehicles travelling under the provisions of ADR chapter 1.1.3.6. Goods, which are transported under the conditions (packaging, weight, etc.) laid down in the respective Chapter (e.g. 3.4 Limited Quantities and 3.5 Excepted Quantities) of ADR are authorised for transit via the Eurotunnel Freight service, under the terms of ADR.

ADR applicable as from 1 January 2015

Copyright © United Nations, 2015.
All rights reserved
NOTE: Depending on the computer used, some symbols, fonts or equations may not be correctly displayed. To comply with the requirements of ADR, refer to the UN official publication on paper.

View and download the full text of the ADR applicable as from 1 January 2015 as published (these pdf files contain bookmarks for browsing through the different parts and chapters):

The files with changes in visible mode are also made available on a separate page (Track changes) (English only). 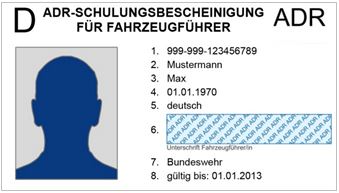 On page of UNECE,  view the layout of the ADR driver training certificates currently issued in accordance with 8.2.2.8.5 of ADR.

To see the other certificates which are still valid, click on the link under the certificate when available on this UNECE page:

The official models of Instructions in Writing (Tremcards) ADR 2015

Recall that with the ADR 2015 tremcards have changed.

Dec. 2014
ADR: Acceptance of amendments to annexes A and B as amended
Depositary notification CN.664.2014-Treaties