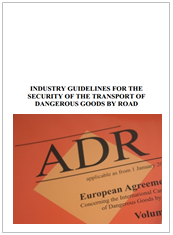 These guidelines provide a list of practical options on how a company can meet the requirements of the Chapter 1.10 on Security Provisions in ADR 2013.

They are the result of a cooperation between 11 industry associations, which represent a large part of manufacturing, transport, distribution and forwarding industries, involved in the transport of dangerous goods.

These Guidelines have been designed to provide as comprehensive a range of technical and operational options as possible, from which users can select their optimum mix measurements The current guidelines replace a previous version (dating from 2010) and are in line with the Security Provisions of ADR 2013

Published: September 2014
Adopted on 30 September 1957 in Geneva under the auspices of the United Nations Economic Commission for Europe (UNECE), the ADR entered into force on 29 January 1968.

The Agreement has been regularly amended and updated since its entry into force. This version has been prepared on the basis of amendments applicable as from 1 January 2015.

Previous editions and CD-ROM versions of this publication are also available: bibliographic information on all editions and language versions

For more information on this agreement, visit the ADR section of the UNECE Transport Division Website.